I’ll take Massive Attack with a fox in a box in the rain on a train and a goat on a boat…Add Kate Blanchette and Director John Hillcoat and I’m swooning.

Next Wednesday, I’ll be playing some records at the annual Fiction International book release party.

To annoy and titilate.

I’ve been working on a project with Gary, my editor for Caustic Soda, on a new musical endeavor called Does It Explode. Mark, with whom I played in Cabron is also in the band as well as my friend, Veronica. Veronica did a few covers with Awakeners, including a slamming version of Portishead’s “All Mine.”

When Gary and I began writing for this project we both wanted to do something outside our comfort zone. Gary is a lead guitar player mostly but plays bass in D.I.E. and I am a mostly rhythm guitar player, but in D.I.E. I’m playing my version of “lead” guitar.

Earlier this month we did a rehearsal studio recording with my friend and creative collaborator, Dan Maier. The tracks turned out quite well. In fact I’m really proud of it. Demos are great because they are raw and help formalize the songs as well as create ideas for refinement of what eventually, will become studio tracks.  No overdubs. We did several takes and on both songs, used the third. Minimal editing. You can hear one ‘wrongstring’ flub in the pre-outro in Pink Crosses.

Via HAZE label, hyper-literate and prolific pan-continental experimental found sound collective, The Fucked Up Beat released their latest sonic document, Roswell Radio Cult. The album is a panacea for the caffeine fueled rat race proletariat. The songs are comprised of melodies supplied by multi-instrumentalist Eddie Palmer of New York, NY with found sounds and beats by drummer/writer Brett Zehner of San Diego, CA.

These Anti-fascist hymnals are ideal for undergarment removal after a PBR drenched, DMT tinted evening or as soundtrack to the window smashing, corporate bank looting riot enthusiasm of hard-line anarcho-punks. Also RIYL listening to music while scanning Russian dash camera crashes. Ballard would be proud.

Incidentally, my partner and I enjoyed listening to this album during our dinner party where we entertained several guests, served locally sourced halibut and soyrizo stew, chilled Malbec while passing our Iolite around the table. 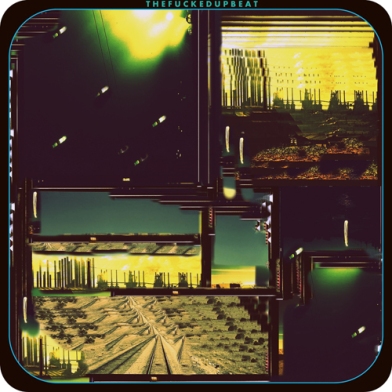